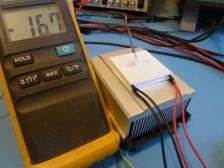 Occasionally small components has to be cooled when doing measurements on them. A peltier element can fulfill this task if the demand of cooling power isn't very exacting. A decade ago where these peltiers very expencive, but nowadays cheap Chinese peltiers are dumped on the market. So, i ordered a couple and did some tests to check there performance. I mounted one on a CPU-cooler and powered was a little disappointed of the minimum stable achievable temperature of -10ºC. This was at a reduced power setting of 33 watt.
A higher power setting than this would rise the temperature again caused by heating up the CPU-cooler . I had in mind my older peltier element which has a greater efficiency. To be sure I measured it. My memory did not let me down: At a power setting, 12 volt and 2.66 ampere (32 watt), it reached a surface temperature of -20ºC. At first glance it looked strange. The new Chinese ones where rated for a maximum power of 123 watt (15.4 V, 8 A) and the old one has a rated power of 36 watt (12 V, 3 A). At almost the same power setting the old one reached a temperature 10ºC lower.

A closer look revealed a much thinner construction. This coud be the cause of a higher thermal conductivity between the hot and cold side. If this is the case it would explain greater losses. The surface area is the same for both types: 40*40 mm.

To simulate a greater thickness I stacked two Chinese elements on each other and connected both electrical is series. Below are the results of this measurement. 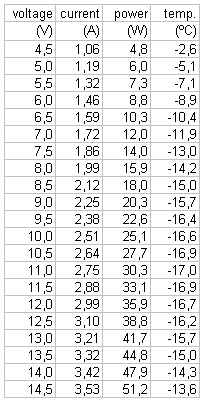 The specifications of the Chinese peltier coolers must not be taken to seriously. It's almost impossible to dissipate the heat generated by the element at maximum rating. When running at a reduced power you have a cooler for a nice price.
X