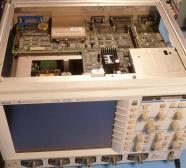 My LeCroy LT344L oscilloscope, the driving force behind this website, was very very ill. At first it took a long time to boot and later it booted not at all anymore. The firm I bought the scope 17 years ago guessed after consulting with LeCroy that it was probably a power supply problem and refurbishing would cost several thousand euro's. And they could not guarantee its future lifespan. Thats a considerable risk. I decided to try to fix this problem myself. Read here the story of my struggles.
The first thing to do is measuring the supply voltages of the scope. And as I secretly expected, they where all within specs. The next step was a search the internet, this learned me that another Waverunner owner had the same problem and was helped on a Yahoo LeCroy Users Group. Conclusion: most likely that the firmware is corrupt. To recover the scope a bootable firmware was needed, made available on the Yahoo group. To get access to it I joined this group.

The software must by applied on a SRAM card which must be inserted into a slot on the back of the scope. So I bought a 2 Mb PCMCIA SRAM. Such a SRAM card fits only in a special PCMCIA slot, a very common slot on notebooks in earlier days. In principle there are two options: a USB to PCMCIA adapter or a PCI to PCMCIA card. Because at that time I had only a laptop and actually needed an backup computer, so I was going for the last option. I order a desktop PC with Windows 10 and a PCMCIA card.

I found out that in the past laptops where fitted with PCMCIA slots. So I asked a friend if he had a old laptop with such a feature. I was in good luck with the news that he had one, only Windows XP had to be installed what was an issue on its own. When this was solved, I inserted the SRAM into the opening, but it goes only partial in and there was any mechanically feed-back or suggestion that a connection was made. It turned out that the slot was of an ExpressCard type, a successor of PCMCIA.

How hard can it be to get some data on a SRAM? We will not give up!

I bought a second harddisk for my PC. So I can install XP directly and keep Windows 10 on the other harddisk. Oh, you already guessed it: XP will not install. Some vague SATA error.

Now I was a little desperate and contacted the LeCroy users group if they have any suggestion how to put the firmware onto the SRAM. They told me that Linux has everything on board to get the job done. So, I put a Ubuntu disk image on a USB-stick. (That is easier said than done if you're not a computer nerd.) Put it into the computer and Ubuntu started. Yes! It ask me if I want to install it. Of course I said. And then started long time of nothingness. The hard disk makes a repetitive sound if it is looking for something, but nothing happens. I took it to the shop where of I bought it, they tested it, and it was a defect one. I got a new one and Ubuntu was installed in no time. But no SRAM visible, damned! I needed the help of my friend again, he is a real Linux freak. After a fight with my computer for a couple of hours he gave up. He got the SRAM identification visible but wasn't able to do anything useful with it. Now what?

I started to think: I know SRAMS, I designed and build some computer where I used this type of memory. They are very easy to use. I searched for the PCMCIA pinout and it looked very familiar. With the help of an Arduino and some CMOS counters and shift registers, it must be possible to put the data into the SRAM. I noticed the two pins for the battery and measured these fist: 0 volts, both! Probably these cards are very old, would the battery be dead? I decided to peel off the cover from one side of the case to access the batteries directly: 2.874 volt, thats more than enough.

But then Sam Reaves, the moderator of the Yahoo LeCroy Users Group, told me that SRAM cards with a attribute memory, the one I had, are not suitable for LeCroy oscilloscopes. He gave me an address from a company who still sells the right SRAM cards. To solve the problem of loading firmware onto the card, Sam offers me to do that for me. So, I ordered the card, shipped it within the USA, firmware was loaded and send to the Netherlands. Meanwhile I received detailed instructions how to run the scope from the card and how to upload the firmware permanently.

So, the card arrived and I inserted the card into the oscilloscope, placed the jumper and - fingers crossed - switched the scope on. Yes yes yes! The scope booted again! It's alive! Ok, now the firmware must be loaded in the flash memory. I followed the instructions, and ... it failed. It seems the data structure from a bootable and loadable version are different. In order to reflash the scope I had to run it from the SRAM card and then load the firmware, or by floppydisk or by the LeCroy software Scope Explorer. The last option can only be done via GPIB.

I have a PCI to GPIB card, cables and software CD's, lets try this first. But the software installation could not completed fully. Well, lets try the second option: the floppies. The floppies must be formatted on the scope otherwise it will not work. After trying a whole bunch floppies, not one would be format. Maybe the heads are dirty, I thought. I removed the drive, screw it open, and then I saw a broken drive belt. I could only buy a belt that was the right length and thickness, but way to wide. An attempt to cut a thinner section from it was not so successful: way too irregularly.

Back to the GPIB. I got the advice to use Keysight's IO Libraries Suite for my Agilent GPIB card, but the software didn't recognize the card or connected instruments. I emailed Keysight for support and got a response the next day. They ask to send some screen shots. So, I installed an old photo editing program that demands to reboot the PC, and then started IO Libraries. As if the devil is playing tricks with me the GPIB card and a connected function generator showed up. I connected the scope and this also was recognized. Next I started Lecroy Scope Explorer, and, it found the scope also. Could it be true? Will I be able to perform the last step: loading the firmware into the flash memory? Yes, finally everything works with me! The oscilloscope functioned normally again!

Well, what an adventure! But that was worth it. Despite being 17 years old the scope is a class on its own. It still can compete with modern day oscilloscopes and outperforms many new ones.
X